Going the Georgia Aquarium was everything I wanted and more! OMGosh talk about experiencing the underworld in their natural habitat. The Georgia Aquarium is the largest aquarium in the western hemisphere and the second largest in the world. It was the largest in the world from the opening in 2005 up until 2012 but China of course had to be bigger and better and built the now largest one in Singapore.

But this place is huge! As you walk though it, you’re surrounded by glass windows displaying the largest, more interesting, intense fish I’d ever seen. My brother Kevin, my beautiful new sister Nardia and my most precious nephew was in town for the weekend and I had to show both them and myself this masterpiece for the first time.

While by now, I’ve lived in Atlanta for about 5 months, I’d surprisingly never made it out to the place but and I was thrilled to experience it with the people I love. And when I say that, I am talking mainly about showing my most favorite person in the world, my three-year-old nephew some badass sharks and underwater animals. I just really wanted to leave a visual impression on the kid that I only hope he’ll remember years from now.

Here are some quick facts about the place:

So going through the Aquarium, much like the zoo, I turned into a three-year-old alongside my nephew peering into exhibits. We saw sharks, dolphins, sea turtles, jellyfish, sward fish, and thousands of other interesting fish of all sizes and varying ancestors. There were even little windows where you can almost step out into a bubble which gives you almost an illusion that you’re swimming with the fish. The aquarium gives you a chance to walk through tunnels where you’re fully immersed underwater looking up to beluga whales and white fish sharks. In less words than more, the aquarium is awesome!

For organizational purposes, the aquarium is broke down by five galleries: River Scout, Dolphin Tales, Cold Water Quest, Ocean Voyage and Tropical Diver. Each exhibit corresponds to a specific environment. 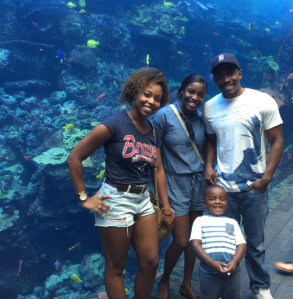 Every part of the aquarium is awesome. It’s extremely visually appealing, educational and even at some parts hands on. For those who are touring in town, this is a must see! Unless you plan on going to China anytime soon, this will probably be the most impressive aquarium you can visit— I’ll definitely be back to see it again!