OK guys, it’s week four. For anyone who know me, the number four has a very special place in my heart. Week four is the week where I want to show people just how far I’ve come. For me, it was to showcase exactly where I am and where I want to be and I did so by publicly sharing on social media for the first time where I’m currently at with this picture.

At this point, I’m convinced that I want to start lifting more for the potential of becoming a swimsuit body builder competitor. Now, not that I want to bulk up a ton, I want to be extra toned with a lean physic. So to do so, I tried concentrating more on what I eat than my workouts.

This week, I’ve learned to really curb my diet. Trying my best to stay away from breads and high carb foods has been a slight struggle, but I’ve come across with a few alternatives. As someone who LOVES bread (much like Oprah) I typically eat it at least four to five times a week. This varies form eating various sandwiches at work, toast for breakfast, and sides such as baguettes and croutons from places such as Panera while enjoying various soups and salads. So here at week four, I’ve decided to cut all of that out —well at least try my hardest.

My meals this week have ranged from salads to burrito bowls, and an occasional cheat meal of my favorite: PIZZA! 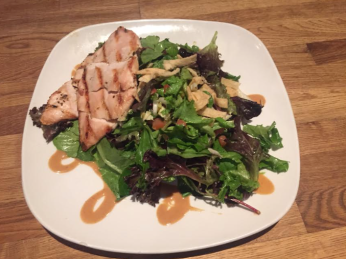 My workouts have ranged from outdoor running, to gym intervals, and lifting. Not that I’ve been doing the exact same workouts, it’s pretty repetitive from my previous posts and I’d rather not bore you guys with the same information. However here is something new: when  free lifting I usually do 20 reps of 15 pound weights per arm. While I know I can do more, I want to ease into this so my muscles can gradually get bigger and better without much strain. I’ve also been working on back exercises. Trying to get away from the bra-strap rolls that sometimes seem inevitable, I’m determined to tone my backside up as well.

So overall, this week has been pretty good as far as keeping up with my diet and exercise. I knew week four would be a great week considering it being my lucky number but what I didn’t expect was the universe to line up perfectly with my end of the week weigh in.